Announcing The Gonzalez Guardians! These dedicated scientists and past patients have been fueling an invisible medical revolution ever since Nicholas Gonzalez M.D. died in 2015. Together we are bringing The Gonzalez Protocol® to doctors and patients around the world.

Our team of Gonzalez Guardians have worked quietly behind the front lines for years to protect Dr. Nicholas Gonzalez’s nutritional protocols. We offer an extensive curriculum and educational program for doctors interested in learning how Dr. Gonzalez achieved such effective results in treating the most deadly diseases. We seek to educate people on how to build healthy lifestyles with traditional diets.

Without Dr. Gonzalez here to carry on his work, The Nicholas Gonzalez Foundation committed to shining a bright light on Dr. Gonzalez’s life-saving natural treatments, because we refused to allow Dr. Gonzalez’s groundbreaking protocols to be extinguished, altered or fade into oblivion like the brilliant work of his mentors Dr. William Donald Kelley and Dr. John Beard.

Now we are pleased to announce that several doctors from around the world have joined the Gonzalez Guardians and recently completed our 2021 Educational Seminar in The Gonzalez Protocol®. Prospective patients can now APPLY to connect with a doctor offering Dr. Nicholas Gonzalez's nutritional enzyme treatment for cancer and other degenerative diseases.

ABOUT THE TWO GONZALEZ PATHS TO WELLNESS

Dr. Nicholas Gonzalez practiced medicine in his private practice in New York City for nearly 30 years. He believed that Nature is a Friend and Not the Enemy. Dr. Gonzalez treated cancer patients as well as patients with diseases such as severe allergies, chronic fatigue, lupus, Parkinson’s, Lyme and those who were interested in general wellness and disease prevention. Fortunately, he meticulously documented the scientific theory of his work with books and lectures and Videos. Dr. Gonzalez also wrote more than 150 cancer case studies demonstrating a lifetime of research and patient care which have been posthumously published Cancer Case Reports. And to help you learn more about the protocol, we have recently posted 12 new FREE Dr. Gonzalez videos.

Prospective patients who are interested in The Gonzalez Protocol® where food is medicine can learn more about how to become a patient here. This aggressive nutritional protocol is not suitable for everyone and requires a significant lifestyle change as well as a personal commitment to an individualized diet, nutritional supplement and detoxification routine. As a first step, the Gonzalez Guidance Group LLC will review all submitted information to be sure that there is a reasonable chance that The Gonzalez Protocol can be of help. You may start this process by reviewing what type of information to submit here.

With thousands of loyal Dr. Gonzalez fans and our new Gonzalez Guardians - the future of Dr. Gonzalez’s legacy has never looked brighter.

Together, we can CHANGE the course of medicine with new research to further document how The Gonzalez Protocol® works. We can HELP people survive cancer and other deadly diseases who might have otherwise perished without this protocol. We offer HOPE to anyone seeking an alternative to conventional therapies and spread the TRUTH about the power of nutrition and how your body can heal itself.

Let's SPREAD the word of The Gonzalez Protocol's effectiveness as a non-toxic treatment for cancer and other serious illness and PROMOTE the powerful message of ecologically-based food production and responsible nutrition worldwide, with a hope for renewed attention to traditional principles and practices.

Our revolutionary team is getting brighter and growing stronger. JOIN us by donating a little of your time, talent and treasure. Please contact the Foundation and Donate.

We are pleased to offer you the opportunity to schedule an appointment with a doctor
who is keeping Dr. Nicholas Gonzalez’s flame alive. These Gonzalez Guardians are
Medical Doctors, Osteopathic Doctors and Naturopathic Doctors who have attended our
2021 Educational Seminar and been certified in The Gonzalez Protocol®. Certification
denotes doctors who completed this seminar and were educated in the theories and
procedures of The Gonzalez Protocol® as determined from Dr. Nicholas Gonzalez’s
published books, lectures, patient files and other writings.

*IMPORTANT: Each doctor has their own patient admission policy and ALL decisions about patient acceptance and treatment are at the sole discretion of the doctor. Submitting your information to the Gonzalez Guidance Group does not create a doctor-patient relationship. This is not established until a doctor accepts a patient into their practice and a treatment plan is begun.* 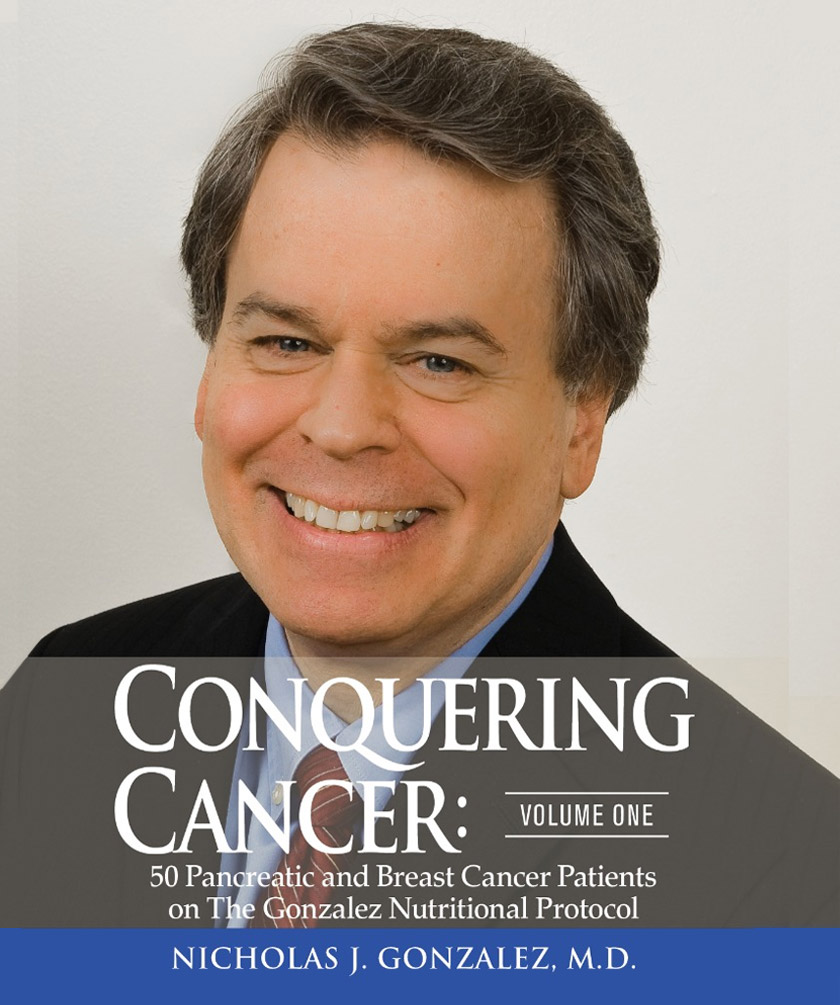 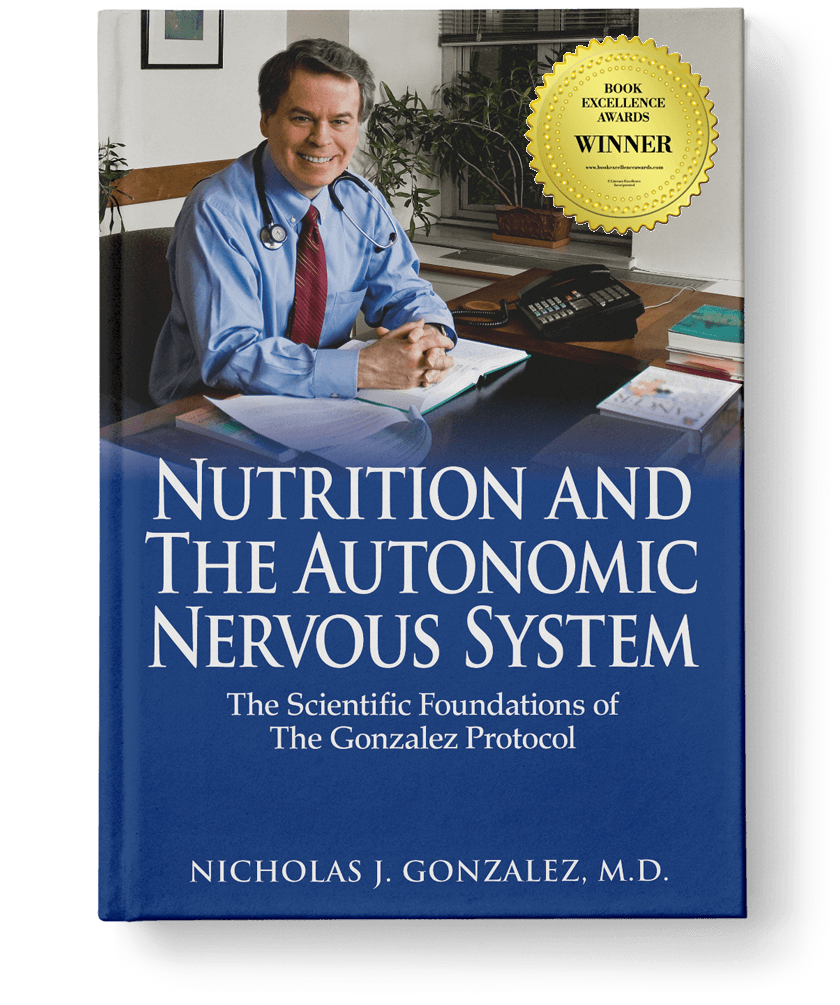 Discover the Scientific Foundations of The Gonzalez Protocol®

“The late Nicholas Gonzalez, MD got true lasting results with these cancers … even to the point of cure. Based on the pioneering research of Dr. John Beard, his protocol uses proteolytic enzymes, diet, and detoxification with impressive success. Conquering Cancer provides a roadmap for doctors and patients who want something other than chemotherapy and radiation — and not just ephemeral hope but lasting success.”

“The best decision I ever made was to eschew Standard of Care, allopathic medicine and follow the Gonzalez non-drug protocol. Nick does not use the word “cure” but I can. Today, I have NED … ‘no evidence of disease.’ I feel great, am perfectly healthy, have great energy, and am in the best shape of my life. I attribute my recovery to Nick Gonzalez.”

Suzanne Somers, Entertainer and Author of 26 books including Knockout – Interviews with Doctors Who Are curing Cancer and How to Prevent Getting It In The Fist Place

“Conquering Cancer reveals an approach to cancer treatment that squarely challenges what is offered by orthodox medicine. Anyone seeking a broader view of cancer treatment should study Dr. Gonzalez’s compelling case histories. This book is a powerful legacy to a compassionate man dedicated to unraveling the cancer mystery.”

Our movement has only just
begun. Please support our 501c3 research and education Foundation so we can
continue to bring nutritional health to patients around the world and visibility to The
Gonzalez Protocol®.